Everyone uses rhetorical devices daily. From the time we have a grasp on language, we attempt to fashion it in ways that will get us what we want. Think of two children—a brother and sister younger than ten—quarreling over a toy. One might say to the other:

“But Mom said we should share. Plus, you could just be nice for once.” 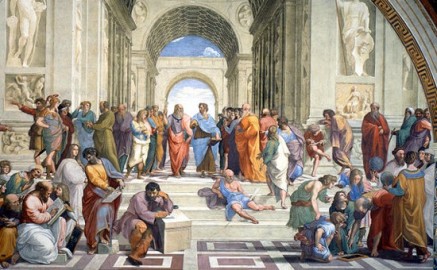 Back to the kids, let’s call them Jack and Jane. Let’s see how they’ve used the pieces of the rhetorical triangle by analyzing their very common arguments. Jack’s first argument, which vehemently defends the position that he should keep using the toy, does so with a logical appeal. Jack’s use of logic breaks down to the necessary assumption of “if mine, then available to me at all times.” This logical appeal, which applies a principal in order to make a logical argument, demonstrates the first section of the rhetorical triangle, logos. Logos is simply characterized as a logical appeal; it could appear in the form of facts, case studies, statistics, logical reasoning, arguments by analogy, and anecdotes (though anecdotes often combine different pieces of the triangle).

Jane’s retort combines the other two pieces of the rhetorical triangle—ethos and pathos. First, by appealing to the rule their mother has given, Jane uses ethos. Ethos is simply an appeal to authority. Think of ethos as an expert witness in a courtroom. Ideally a doctor would address medical concerns, a psychologist matters of the mind, and in Jane’s case, a mother would stand as an authority for correct behavior for the children in her household. Since the mother makes the rules and functions as the guide for the Jane and Jack, her authority extends to arguments about appropriate behavior for the children; therefore, the mother’s words could have serious implications for Jack as he lives under the mother’s authority.

Jane’s use of pathos, or an appeal to emotion comes in her final statement, letting Jack know it wouldn’t hurt him to be nice. The statement implies that Jack is mean regularly, and that he should feel obligated to be nicer. This sort of universal appeal assumes that Jack should feel bad about certain behaviors and that that feeling would influence his actions. Probably the weakest part of Jane’s argument, pathos can often function as the most influential of the triangle in real-world situations. Take for example those heart wrenching SPCA commercials with the inspirational slightly cheesy (well, incredibly cheesy) Sarah McLachlan song setting the mood for an array of pitiful images of shivering neglected pets. These commercials almost exclusively utilize pathos in order to persuade the audience to donate money. Obviously, the idea is that people should feel bad for these animals, and since they don’t advocate shivering one-eyed dogs having to listen to that terrible song all day, they should donate money. Ok, maybe that’s not exactly it, but you get the picture. The idea is to connect emotionally.

Now, we can look at the components of the rhetorical triangle, logos, ethos and pathos, through the lens of their basic definitions (logical appeal, appeal to authority and appeal to emotion), but we can also consider the three sections in another light to gain more perspective.

Logos: We can think about logos as a rational appeal, but we can also consider it the composition of the argument—the meat and potatoes of what’s actually being said or argued. In fact, when using pathos or ethos, writers must usually employ logic at some point.  Pathos can serve to nudge the audience into a frame of mind where they are ready to accept certain necessary conditions that logically lead to accepting the author’s appeal.

Ethos: We can think of ethos as an appeal to authority, but we can also consider ethos as the speaker of the argument—the person with the authority to make the argument, who is putting forth the argument with logos.

Pathos: We can view pathos as an appeal to emotion, but we can also consider it the bridge between the qualified speaker and his/her audience. Pathos allows the speaker to connect first to the audience and, secondly, to connect the audience to the logical argument within. 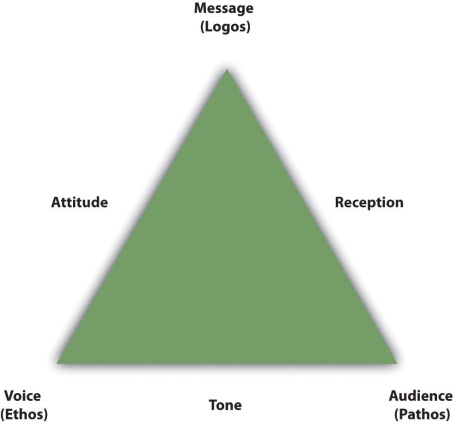 The rhetorical triangle is simply a device for considering the way arguments function. In freshman and sophomore writing courses, students often deal with assignments geared toward addressing the bits of an argument and their functions, so it certainly does not hurt to brush up on the sections of the triangle and their uses. Furthermore, you have been using these functioning pieces of rhetoric your entire life. Understanding the ways your arguments fit together and work to generate a cohesive and effective appeal will only ever improve your abilities to persuade your audience—an effective skill for any career or major, or really any part of life.