A writing center is not supposed to be a place where consultants merely proofread papers. A writing center is supposed to be a place where consultants help writers develop and learn. Most of the time, consultants approach higher order concerns first; some higher order concerns include content, overall format, and transitioning. However, how do you avoid merely proofreading when there are so many grammatical errors that reading the paper becomes difficult? This is where “teachable moments” come in. 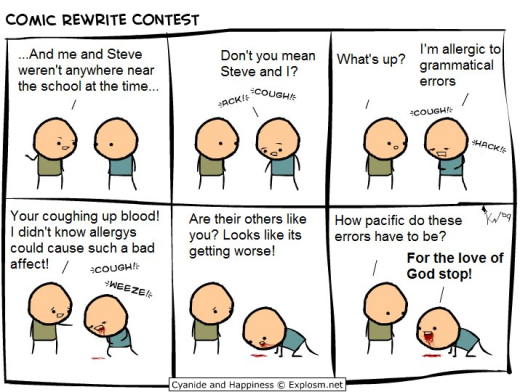 “Teachable moments” come in all shapes and sizes.  As writing center consultants, it’s our job to seize these moments and capitalize on them in the form of student learning. For example, one of my clients, “Howard,” was struggling with knowing when and where to use commas. I wanted to grab the paper and start writing in all the commas myself; however, I took the time to explain to Howard why commas go in certain places.

One “teachable moment” occurred when Howard had a comma splice in one of his sentences: “The computer turned green, she dropped it in green paint.” I wanted to tell Howard to put a conjunction in after the comma. Instead, I broke down my reasoning as much as I possibly could.

The comma use handout was rather helpful in explaining all of this to Howard. The next time I noticed a comma splice in the paper, I asked Howard if he noticed that anything was wrong. Since Howard did not notice the first time, I explained to Howard how the second example was also a comma splice and showed him again how to fix it. As the paper continued, I slowly weaned Howard off of my assistance and helped Howard to notice the mistakes himself.

After clarifying what independent clauses and comma splices were, I explained to Howard the different ways he could fix a comma splice: add a conjunction, use a semicolon, or make a new sentence. After Howard fixed one sentence, I challenged him to find the next comma splice. By the end of the paper, Howard was fixing his own comma splices without my help.

This “teachable moment” helped me to see that it is possible to help clients with grammar in a way that reflects the values of a writing center. This has been an extremely valuable lesson to me, especially with students who speak English as a second language and with clients that have to turn in their assignment in about an hour. Higher order concerns should always be discussed first, if at all possible. But, even if lower order concerns have to be discussed, a writing center can stay a place of learning.