Language and Grammar: Does it Make Sense?

i can speak. i can speak goodly. but when i write the way i write is like how i talk and it dont make sense. or it does but people say that im “grammatically incorrect” or something but i dont get it. they still understand what i saying. why be “correct” if people still understand me?

There is an answer to your question, but it’s a lot more complex than you would think. The simple version is that because the written word doesn’t have the full functionality of spoken word, certain concessions have to be made to effectively communicate.

Now, let me be clear, grammatical correctness is important. Very important. However, you’re right: You don’t need to be grammatically correct for someone to understand what you are saying. Humans are smart creatures, and we seek to make sense of the sensory muck that we are constantly bombarded with. To combat this, our brains developed certain tricks to ease the process along, primarily with visual and auditory cues, but it could be for any of the senses. 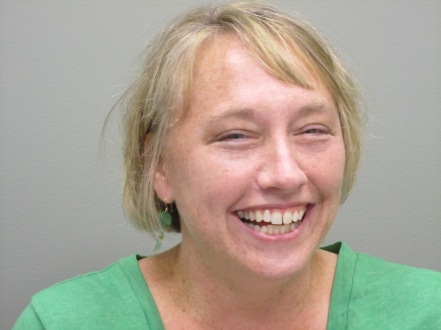 You would probably say that this person is happy. Why? Well, your brain is helping you out by recognizing certain patterns (smile, soft forehead, relaxed eyes, etc.) and translating them to an emotion. But it’s not just the facial patterns; it’s also the physical lines and shapes that the face makes that cues off this line of thinking. For example, if I showed you a broken down version of that picture, 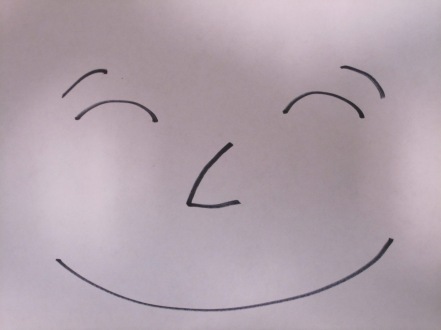 you’d probably at least recognize that face as a happy one as opposed to an angry one like this: 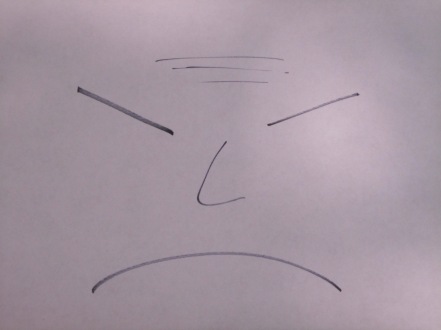 Okay, so what does this have to do with grammar?

Remember how I said that your brain makes certain shortcuts to speed things along? Well, with speech, our brains pick up on not only what someone says but also how someone says it. When you watch someone talk, you notice lots of things other than what’s actually being said. There’s the facial expression, the tone of voice, the inflection of words, the physical gestures that they use, the rhythm and meter in which they speak, and so much more.

Now, have you ever noticed that when you talk on the phone with someone, especially if you’re talking about something very serious or emotionally heavy, that it’s harder to connect with the person on the other side? Why? Well, you’re losing half the conversation! Your brain doesn’t have the visual cues to work off of, so what the other person says isn’t entirely translated. Of course, you still have voice inflection, meter, and vocabulary on your side, so not all is lost. You can still effectively communicate on the phone; you just have to make some adjustments in the way you speak.

You have the physical words written on paper, for one. But the manner in which you speak, the how, is still missing. For example, in the following sentence, you could place the stress on any of the words, and it will completely change the meaning of the sentence:

I never said that you stole the money.

I can bold the words in the sentence, of course, which technically acts as a visual cue, but I don’t always have that ability, nor is it always relevant to do so. That’s where grammar and punctuation come in.

Before I go on, let me say this: English is a prickly language, especially written English. A lot of the grammatical problems in written English are not because people don’t know the rules; it’s because the rules are so confusing and contradictory. Written English is only kind of phonetic–most words follow the pronunciation rules but a lot don’t. Furthermore, English has a lot of strange and inconsistent constructions based on the older languages it’s built upon (for example, usually to pluralize something, you just add an “s” or “es” to the end, but not with a word like “octopus” or “ox”).

There are two kinds of languages that exist. The first are synthetic (or syntactic) languages, and the second is analytic (or semantic) languages. German, Latin, and French are examples of synthetic languages. These languages rely on inflectional endings to not only determine the case and number of a word, but also to determine the grammatical function of the word in the sentence (is it a subject? object? adjective?). English (as well as Chinese) is an analytic language, and it focuses on the placement and usage of words both within the sentence and in relation to other words to determine function. (We have some form, but we don’t rely on it as heavily.)

When you write in a language like German, focus is placed on the ending of the word to determine its meaning. While word order is important, you can determine the meaning of a sentence simply by the ends of the words. There isn’t a whole lot of need for things like commas in German because phrases and clauses are separated simply by the form of the word. (It still has them, but they aren’t used nearly as much as in English.)

However, this isn’t something we can do in English. We need punctuation marks like commas, semicolons, colons, etc. because our sentences wouldn’t have the same meaning without them. Take the following sentence, for example:

In this, the speaker is addressing grandma, telling her that they should eat. However, if I remove the comma:

This is why understanding grammar and punctuation is so important for written English. If your sentences aren’t grammatically correct, you can drastically change the meaning of what you’re saying, thus confusing your reader. After all, the purpose of language, written or spoken, is to effectively and efficiently communicate your idea to your audience. If you don’t use grammar properly (thus not effectively communicating), your audience may misinterpret what you say.

There’s a kicker to all of this, however. A lot of times–and especially with English because of the type of language that it is–there are grammar “rules” that are either not real or outdated. For example, if your English teacher ever told you to never end a sentence with a preposition, they’re a liar. Of course you can end a sentence with a preposition in English! Why not? It makes total sense, and there’s even a construction in English to accommodate for it.

So why are people so insistent on not ending your sentence with a preposition? English is composed of a lot of different languages, Latin being one of them. When English was being standardized as a language, Latin was still considered a “superior” language (because it was the language of the church), and a lot of English rules were based on Latin grammar. In Latin, you can’t finish your sentence with a preposition because it wouldn’t make sense, but you can in English. The rule was made not because of function, but because of the cultural thinking at the time.

The third-person plural pronoun in English has been up for debate for a while, too (he/she vs. they). I’ve broken it a number of times throughout this entire entry because the rule doesn’t make a whole lot of sense to me. Per the rule, if your subject is singular without a specific gender assigned to it (someone, for example), then you have to use his/her as the pronoun. For example:

If someone wants to go to prom, he/she needs a date.

However, it’s very clunky to say “he/she needs a date,” and I personally think it’s a little confusing, too. That’s why people substitute “they” for “he/she.”

If someone wants to go to prom, they need a date.

Technically, that sentence isn’t grammatically correct because the pronoun numbers aren’t in agreement, but you understand what I’m saying because your brain can make the connection. This is another example of a stylistic grammar rule that inhibits physical communication. Again, the point of language is to communicate as efficiently and effectively as possible and having to say or write “he/she” rather than “they” is not very efficient. Others may disagree, but that’s the beauty of language.

But this is only scratching on the surface of the issue. Grammar is really important because it helps us communicate, but not every rule is relevant. Unfortunately, the only way to really understand which ones are optional is to know why the grammar rules are there in the first place, which takes an awful lot of time. That’s not to say don’t study grammar. Absolutely study grammar. It can make a huge difference when writing or speaking to someone, especially in professional situations.

So, in short, grammar is important. You won’t go wrong by having proper grammar.