A frustrating problem has arisen from feedback I have received from my teacher on an essay about dominant versus passive personality types. A poor grade was received on the paper, and the teacher’s comments were telling me that my writing used the passive voice so much that my essay was not comprehensible! Embarrassment and misery have dominated my mood since those comments were read from the page. Can you help I (?), I mean me, revise my writing to be more active and less passive?

During my many years in the UWC, I have had numerous discussions about passive voice. The conversations in these sessions vary, as it does in scholarly discourse. Oodles of clients have been told numerous times by their teachers that their writing contains too much passive voice and that this should be “corrected,” but they are not told what passive voice is or how to identify and revise it. To make things interesting even more interesting, a handful of clients are emotionally attached to the passive structures in their writing and buck the very thought of considering alternatives. For some, the passive voice is their “I sound really smart” writing voice. To further obfuscate the debate, there are certain types of writing that value the passive voice, such as scientific discourse.

I have found that more often than not writers develop issues with passive voice because of an absolute taught during grade school: DO NOT use the first person pronoun, “I,” in academic writing! Consequently, a lot of writers overuse passive voice in an attempt to follow this “rule.” In reality, there is no such rule. Using “I” in academic writing is perfectly acceptable, but as with most things, it is best used in moderation (just like passive voice). A writer’s attempt to surgically remove any and all first person from her writing frequently traps the student in passive voice. This is often where the problem starts.

To understand and reconcile one’s intellectual or emotional issues with passive voice, one first must reflect on his/her past experience. When you were a child, did things happen to you? Or did you happen to things? Well, both. Sometimes a rock falls on you, and sometimes you fall on a rock. This is the fundamental relationship at play when a writer chooses to toggle between active and passive voice.

In this sentence the meteor is the thing carrying out the action. The meteor did two things: it collided and it killed. Justin Bieber, in this sentence, is the person receiving the action. He bore the brunt of the collision, and he lost his life as a result.

Justin Bieber, while performing at Madison Square Garden, was killed by a giant colliding meteor. 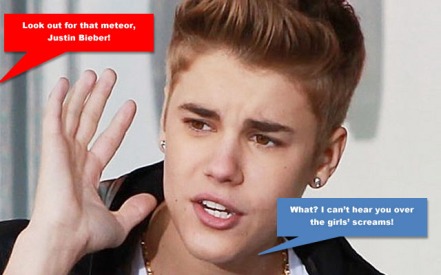 In this example the sentence has simply flip-flopped. Now Justin Beiber is the subject of the sentence, which usually indicates who/what is doing the action, and the meteor is the object of the sentence which typically indicates the person/thing that receives the action. The second example is just as grammatically correct as the first; however, it requires more words, is more difficult for the reader to understand, and makes just a little bit less sense. Just the phrase “giant colliding meteor” alone is a tad bizarre. Some writers might think that the second example is better writing because it uses more words and complex structures, but that’s a false assumption. Any writer’s first concern should be clarity. Can someone easily read and understand this piece of writing? The use of more words or more complex structures for the sake of appearing “sophisticated” or “academic” puts writer insecurity first and reader comprehension second. To create a successful piece of writing, the reader should always come first. The first example is better writing, because it is more direct, clear, and accessible for the reader.

All of this discussion begs the question, “How do you fix a problematic passive sentence?” The strategy that I use is fairly straight forward. I take the flip-flopped sentence and flip-flop it again. This works by taking the object of the sentence and making it the subject, making the subject of the sentence become the object. Doing this usually gets rid of unnecessary words, prepositional phrases, and weird verb constructions.